I originally purchased my 2011 iMac out of frustration. I had a G5 that was long in the tooth so, purchased a Core2Duo model off eBay that turned out to have graphics tearing issues. I tried to sort it out by getting the BGA re-flowed on the graphics chip which just made it worse. And finally, went out and grabbed a new one.

I opted for the i5-2500s with a 500GB HDD and whatever the base RAM was. Since it is a socketed, desktop CPU vs mobile, I knew it could be swapped provided Apple didn't do anything intentionally locking in the CPU model numbers.

First step was to upgrade the non-warranty voiding parts - so, I added an SSD (using an OWC kit) and made a Fusion drive while also upgrading the RAM to 16GB (generic Kingston from NewEgg). This saved quite a bit of money vs the Apple build-to-order options.

Eventually, the CPU performance was starting to annoy, and after waiting for the AppleCare warranty to expire, I have fully torn down my iMac and am now working with a significantly faster i7-2600s.

However, it didn't happen overnight. Here's some of the lessons I learned:

1) The i7-3770s will NOT work in a 2011 iMac. I was really disappointed to discover this as it's really just a process change from Sandy Bridge to Ivy Bridge. The biggest reason was simply due to availability of processors. Sandy Bridge prices had gone back up due to limited availability.

2) Fortunately, I had a 2600k laying around the office, so I tried it. And, I can verify that the i7-2600k WILL work in a 2011 iMac. But not perfectly. The issue comes at boot - my iMac would have a kernel panic on the initial boot, but make it through the second time. This made software updates challenging, and some that require a reboot would never install properly. Further, Airplay stopped working with the 2600k.

4) The i7-2600s, while not as fast as either the "k" or the Ivy Bridge, works fantastically! All the quirky behavior exhibited with the 2600k is gone, which makes sense, seeing as it was an offered build-to-order model by Apple. Finding the 2600s was fun. I eventually broke down and bought it from a questionable seller as a "Like New" item on Amazon. To be fair, it works great, so the seller was legit! 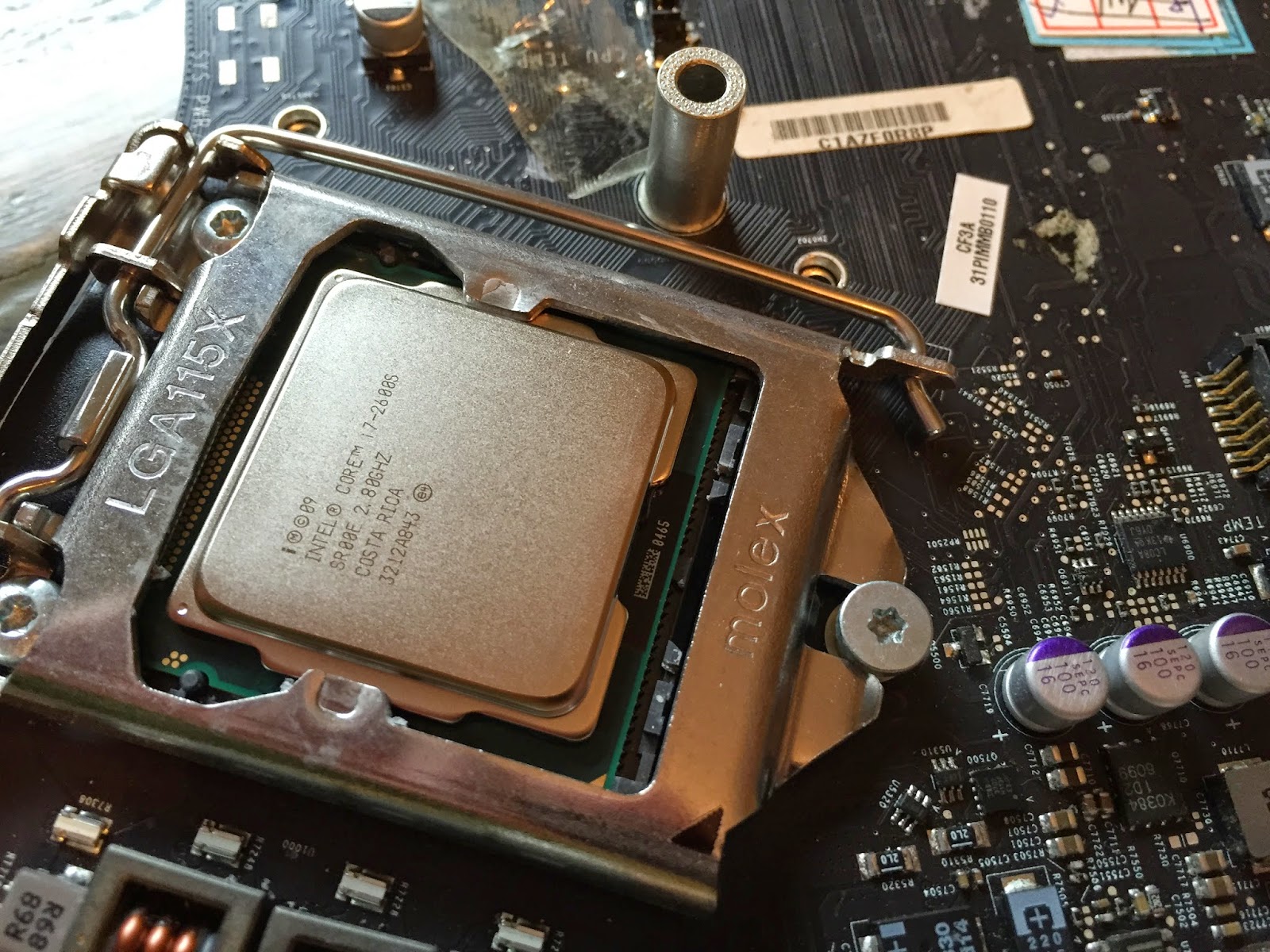 Hopefully, my upgraded iMac will keep me content for another 2-3 years. At this point, Apple has stopped making computers that can be modified in any way by users. My 15" RMBP needed to be purchased exactly as I wanted it since every single component that used to be user-replaceable is now soldered to the board barring the at-the-time unique PCIe SSD. So, I can't go the "cheap" way next time 'round... and it's kind of sad to realize that.

Note: OWC has a helpful video to follow and iFixit has lots of pictures to help so that you don't have to pause it every 2 seconds. There is no need to take out the PSU as iFixit shows. I'm not showing the steps since other's have done a great job already.
Posted by Rob at 12:33 AM