I'm trying to put together some graphs on the real story regarding the employment rates in the US. When you hear about unemployment numbers, they always leave out a few bits. The first is that "Unemployment Rate" is defined as the percentage of people who are in the labor market who don't have a job. This often does not count stay at home moms, retirees, homeless, etc. What I am plotting is the percentage of the population who have a job (Employed) + percent of people who are looking for a job/claiming unemployment (Unemployed) + percent of people who aren't in the labor force (the group defined above). The percentages are of the entire population. So, unemployment of 6% in this graph means something different than the 8-10% talked about on the news. However, anyone not in the labor force is, by my definition, unemployed. They aren't actively contributing to the tax base in any way. It's real disturbing that less than 60% of the population is considered employed.

The important thing to notice is that the percent of people employed has not increased at all in the past 3+ years under Obama. In fact, this is the lowest the employment rate has consistently been since before Carter. Additionally, the percent of people "Not in the Labor Force" has been trending upward for the past 4 years... and we know that this is not because people are suddenly getting wealthy and being able to retire.

I'm adding a new Employment Rate chart using the latest June 2012 data. Except it now extends back to 2000. It shows how disturbing the employment rate drop has truly been.

This will continue to be revised as I work on more plots. Eventually, I will link to the final spreadsheet. 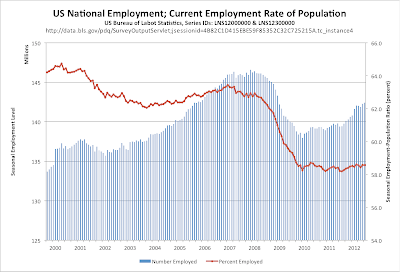 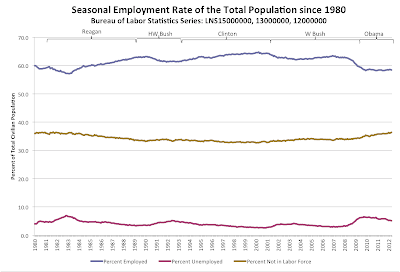 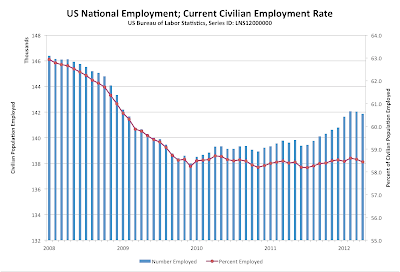 Email ThisBlogThis!Share to TwitterShare to FacebookShare to Pinterest
Labels: Hope and Change, Politics