Right off the bat: I love nuclear power. I'm a geek. A nerd. Nukes, whether as a bomb or as a power source, are just amazingly interesting. So, it saddens me to see all the anti-nuke attitudes in the world.

Let's get some things straight: Fukushima was a horrible accident. But, in the grand scheme of nuclear incidents, my opinion is that it actually proved how safe nuclear power can be if properly handled. The radiation in the area simply doesn't compare to in scale to what has happened in other parts of the world. There was a great chart made up by Randall over at xkcd.com (April, 2011) which really puts it into perspective. I've got it below for you to see. 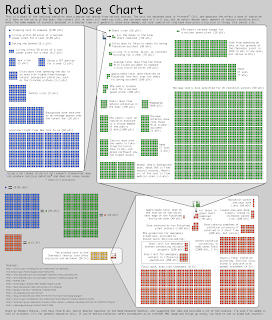 
The greatest tragedy is the loss of life due to the tsunami. Not the nuclear reactor. People were able to safely reside in the area around Fukushima for weeks afterward without significant injury. If there is the time available to properly react, Nuclear reactors simply don't pose a threat to life. But, people around the world have got it in their craw that nuclear power plants are deadly time bombs waiting to destroy all life.

I have to admit there are other concerns surrounding Fukushima: Denial, over confidence and poor damage control. There is evidence that the situation isn't being handled properly. Water levels are not at the expected level within the containment buildings thus causing radiation levels to be higher than expected. Did this happen because people thought the initial solution would work and didn't follow up? I would have to say, yes. You don't just let a situation intentionally get worse. There had to have been a degree of confidence that the fix in place was adequate without daily monitoring verifying this one way or another. However, it isn't an insurpountable problem.

So, while there is certainly a degree of risk associated with nukes, they are a lot safer than many other options in the world (such as continuing to fund radical Islamic states through purchasing their oil which could land us with more terrorism and dirty bomb threats). And nuclear power is simply getting safer as we are able to invest in concepts and ideas to ensure the safe management of the power source. The latest nuclear plant design by Westinghouse proves that we have the ability to safely live with nuclear reactors.

I hope it is not too late. 70% of respondents to a poll in Japan favor ending reliance on nuclear power. Another poll has the number at 59% against.

Japan has in total 54 nuclear reactors. As of May 5th, they should all be shut down for maintenance. The supplemental power is being provided by "old fossil fuel" plants (Oil? Coal? NG?), but I'd be immensely surprised if they have the necessary capacity for the country to operate without any Nukes running.

Email ThisBlogThis!Share to TwitterShare to FacebookShare to Pinterest
Labels: Energy